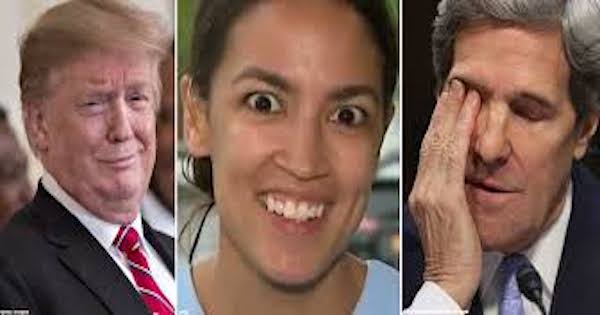 Kirsters Baish| Democrat John Kerry, who also served as Secretary of State, made an appearance this week to speak to Congressional leaders about climate change.

Kerry claimed that New York freshman congresswoman Alexandria Ocasio-Cortez has done more “in one day” than President Donald Trump “has in his lifetime” for the issue.

“There are a lot of different proposals on how to proceed… In proposing what she has proposed together with Sen. Markey, Congresswoman Ocasio-Cortez has offered more leadership in one day or in one week than President Trump has in his lifetime on this subject,” stated Kerry.

ICYMI: @JohnKerry praises Rep @AOC efforts to combat #climatechange as opposed to #PresidentTrump who refuses to lead on this issue. “Congresswoman Ocasio-Cortez has in fact offered more leadership in one day or in one week than #PresidentTrump has in his lifetime on this. " pic.twitter.com/iQEtLpHZWA

Kerry’s comments come just days after Ocasio-Cortez’ ‘Green New Deal’ failed to secure a single “Yes” vote in the US Senate, with virtually all Democrats voting “present” on the massive government program.

Alexandria Ocasio-Cortez (D-N.Y.) has suggested that the United States would have “blood on our hands” if legislation is not passed to tackle climate change.

Ocasio-Cortez started off by asking Hagel, “Do you think that neglecting to address these threats is – could contribute to an American – the loss of American life?”

He confirmed that he did believe that “neglect” could contribute to the “loss of American life.” Then, she asked, “And do you think that denial or even delaying in that action could cost us American lives?”

He answered yes again. She then asked Kerry, “Do you think that appointing a federal panel that questions 26 years of established climate science (could) be responsible for the loss of American life?”

He answered, “It could be.”

Ocasio-Cortez then followed up with, “So I think what we have laid out here is a very clear moral problem and in terms of leadership, if we fail to act or even if we delay in acting, we will have blood on our hands? I don’t know if you’re allowed to agree with that Secretary Kerry or Secretary Hagel, but would you agree with that assessment?”