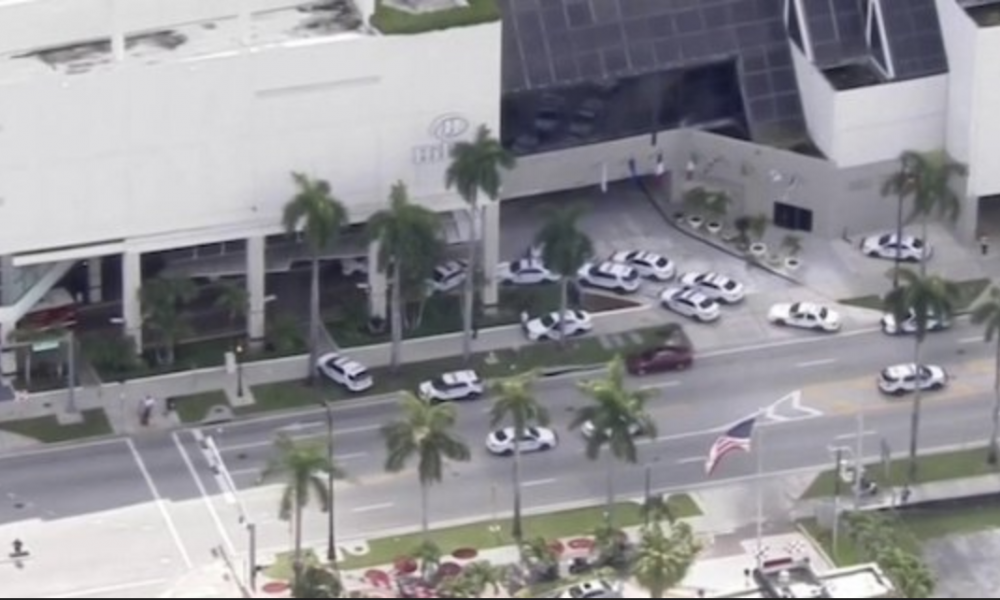 UPDATED: GWP is reporting that “Three people were shot in a possible road rage incident outside Trump International Beach Resort in Sunny Isles, Florida on Sunday.

#Update: Just in – Video of the 2 suspects being taken into custody and being arrested, after they fled the road rage incident, near the Trump International Beach Resort in Sunny Isles Beach #Miami in #Florida. Credit: @madisonXcassidy pic.twitter.com/pzP06OwFR4

Early reports suggest the location of the shooting is a coincidence and not tied to hatred for President Trump.

It is being reported that the deceased is a man who was tragically caught in the crossfire.

The victim is said to have been a Hertz employee.

Below is a video taken inside of a nearby restaurant following the incident.

Three people have been shot in what appears to be a road-rage incident at the Trump International Beach Resort in Sunny Isles, Florida Sunday afternoon.

The incident was not far from a kosher restaurant. Sources said two suspects were in custody and police were searching for a third.

Authorities say at least one person is dead after shots ring out.

Homicide detectives are working the investigation, we are working to learn more from the scene @wsvn pic.twitter.com/l5CP30MBks

Heavy is reporting “were injured and one man was killed during a shootout in front of Trump Hotel in Sunny Isles, Florida on Sunday afternoon. Sunny Isles Beach Police have confirmed that a 19-year-old female was transported to Aventura Hospital and one man was killed in the shooting that occurred at the Alamo Rent A Car along Collins Avenue, Sunday afternoon. Police said the suspects were armed with an AK-47 and several handguns.

The Miami Herald is reporting that the 19-year-old female was the girlfriend of rapper NBA Youngboy who was involved in the incident. The witness, Anna Rodriguez, said that a fight broke out in front of the Trump Resort that escalated into gunfire. It’s unclear who shot first or why at this time.

Officials also confirmed that two of the three suspects are currently in custody.”

TMZ has also published an unconfirmed report suggesting that the shooting may have been related to the rapper “NBA Youngboy” who is in town to perform Saturday night at the Rolling Loud music festival.  TMZ is saying that a car pulled up and opened fire on the rapper’s car, that is when the artist’s bodyguard opened fire.  Interestingly, TMZ’s sources seem to be saying that NBA Youngboy was staying at Trump’s resort.

It should be noted that these facts are yet to be confirmed by authorities.

So far all police have confirmed is that one person is dead and another was taken to the hospital for treatment.

We ask that you please pray for the victims.