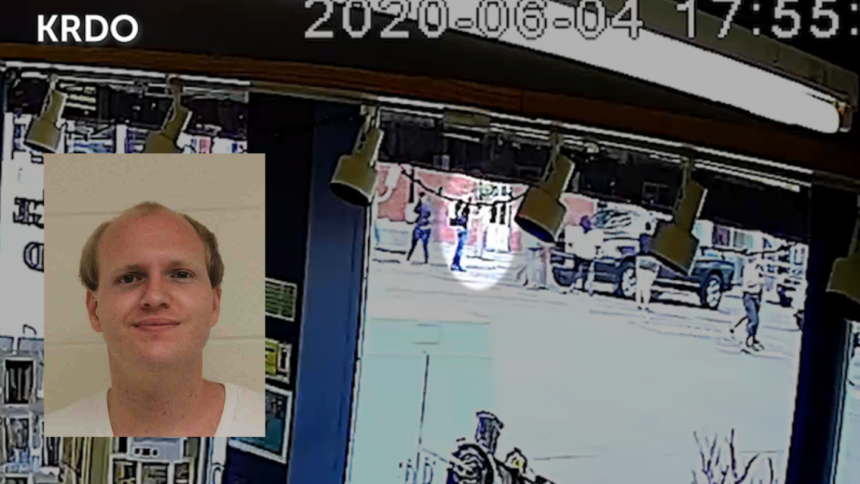 What is it about lawyers and violence at a Black Lives Matter rally? In New York, two lawyers tried to bomb an occupied police vehicle and now a 27-year-old lawyer in Alamosa, Colorado has shot a driver of a pickup truck in the head.

Attorney James Marshall approached a pickup truck trying to get past protesters when Marshall pulled a gun from his pocket and shot Danny Pruitt, 49, of Canyon City. His family has started a GoFundMe page. Pruitt is on life support. Nothing else is known on his condition.

The left has become totally deranged and Democrats in Congress stand in solidarity with the rioters. They have become nothing but common thugs. Marshall has been charged with attempted murder and assault. The charges will be upgraded should Pruitt succumb to his injury.

Controversy continues to rattle the small southern Colorado city of Alamosa after police say a local defense attorney, who was protesting, shot a driver in the head Thursday evening.

KRDO NewsChannel 13 obtained security camera footage, which has been provided to police, from a nearby business that captured the moments surrounding the shooting.

The surveillance video time-stamped at 5:55 p.m. Thursday shows the incident in its entirety during a protest in downtown Alamosa. The video shows about a dozen protestors were lining Main Street with signs in hand.

A black truck pulls up and as the driver goes through the crosswalk. That’s when a protestor reaches in their pocket and pulls out what police say is a gun. The surveillance video shows the protestor aim the object at the passenger side window of the truck.

Alamosa Police said they found the driver, Danny Pruitt, alert in his truck about a half-mile away from the scene of the shooting. Shortly after, officers arrested James Marshall on a slew of charges.

On Friday afternoon, some protestors told KRDO the driver plowed through the crowd, but Alamosa police said there is no evidence to support those claims.

“We’ve heard the same thing,” Capt. Joey Spangler said. “But again, it’s an ongoing investigation. I can say we have no evidence to show that he was driving into or through the protestors.”