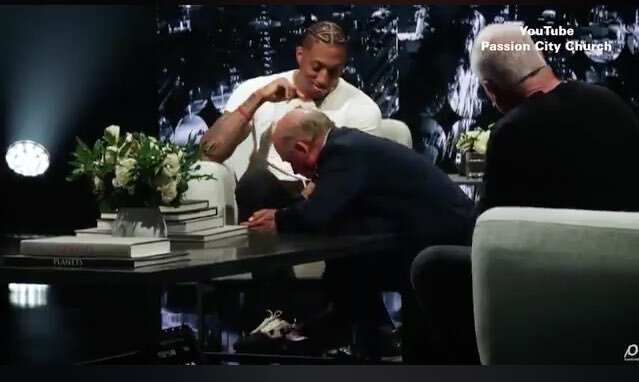 I have to confess, my fat ass loves the food at Chick-Fil-A … too much for my own good.

The number 2 is, IMHO, the best sandwich you can get … without getting out of your car to order, pay for and consume.

I always respected the fact that Chick-Fil-A closed on Sundays due to the religious ideals of it’s founders.  Leaving all that money on the table because of your faith in God is a powerful message, one which I respect.

I also respect when people try to bridge the gap between, well, any two groups which seem to be at odds with one another.

That being said, what I do not appreciate are stunts that are, in my view, patronizing and a shameless display of virtue signaling bordering on cuck/simpish behavior.

How the CEO of Chick-Fil-A thought it would be a good idea to shine this man’s shoes because of the color of his skin, is beyond me.

This does not look like some honest gesture or effort to bridge the divide, it looks like a transparent virtue signaling stunt that came off as more patronizing than anything in my view.

What do you think?

“I invite folks just to put some words to action here and if we need to find somebody that needs to have their shoes shined, we need to just go right on over and shine their shoes.”

“Whether they got tennis shoes on or not — maybe they got sandals on — it really doesn’t matter. But, there’s a time in which we need to have some personal action here. Maybe we need to give them a hug, too.

“I bought about 1,500 of these [brushes] and I gave them to all our Chick-Fil-A operators and staff a number of years ago.”

“So, any expressions of a contrite heart, of a sense of humility, a sense of shame, a sense of embarrassment begat with an apologetic heart — I think that’s what our world needs to hear today.”

Here is the complete video:

I don’t even know what to say.  How does this help further equality?

To me this looks like some Democrat level pandering, little different then their staged kneeling moment in the Capital Building.

How about we just start treating one another with respect and decency and stop focussing on what color one another’s skin is?

Whatever happened to EQUALITY?  Shake the man’s hand, look him in the eye … do it off camera, don’t make a show of it.  If we all just acted the way we wanted society to function all this crap would be over already.  FFS, how hard can this be?