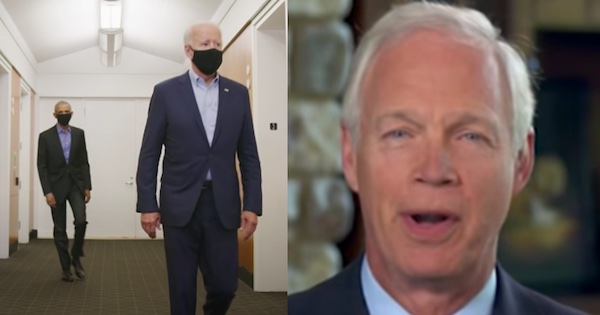 The abuse of ‘Law Enforcement’ powers in this country are reaching the most dangerous level in the history of our storied republic.

Just in case you were not aware of the fact that the FBI is now serving as a the law fare arm of the Marxists in America, let this be your wake up call …

During their discussion, Senator Johnson said he was “set up” by FBI-Stasi agents to stop him from talking about Hunter Biden and his filthy perverted lifestyle.

Senator Ron Johnson: We got another briefing by the FBI. And there was nothing there, really. Literally, there was nothing there. It was a Framed. I knew it was a nothingburger. They wouldn’t tell me what was behind the intelligence. So I started immediately saying, “Who told you to give me this briefing?” And all I got out of them was, “Oh, interagency.”… “Who told you to brief me this?” I knew I was being set-up. And by the way they set the trap a couple weeks ago in the Washington Post. Once again, here’s Cedric Johnson, “He’s being used as a tool for Russia, defending Russia disinformation.” It’s completely false. A comlete set-up. But that was the FBI that did that to me.

Via The Palmieri Report:

.@dbongino: "This is terrifying that elements of our federal law enforcement intelligence infrastructure… are being abused to trap elected representatives of the American citizen." pic.twitter.com/wdoU1LQ7Lf

The Federalist: FBI’s Failed Ron Johnson Set-Up A Case Study In How Agencies Use Corrupt Reporters To Peddle Lies, Hurt Their American Enemies