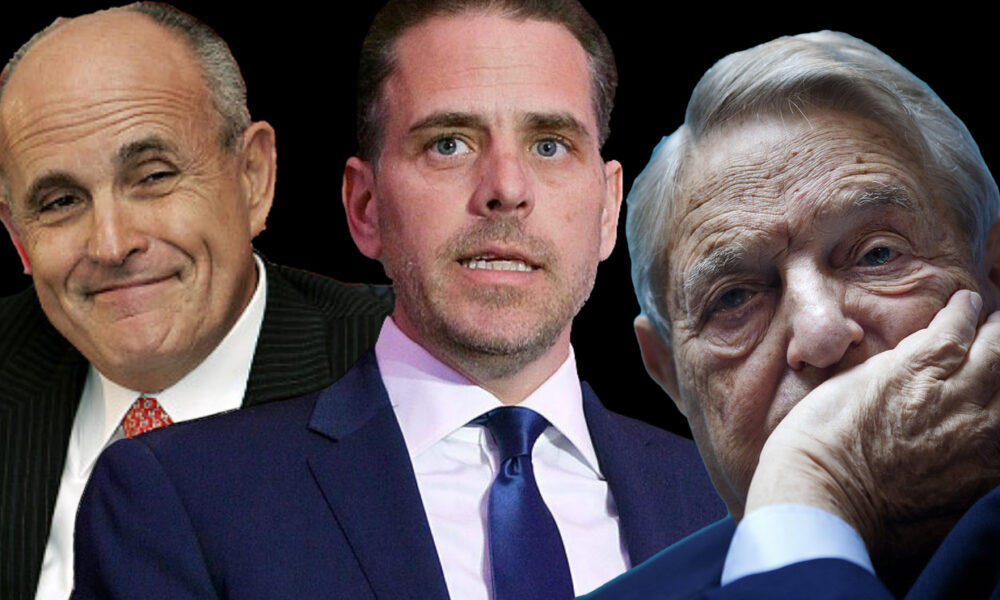 A team of private investigators have made a filing to an Arkansas court for inclusion in the child custody case between Hunter Biden and stripper Lunden Alexis Roberts.

The complainants, D & A Investigations alleged in a December 27th filing that the “bank account records bear exhibit identifier(s) known by [Hunter Biden] as the subject of criminal investigation(s) both adjudicated and ongoing, of which he is a party to.”

The significance of D & A’s claims are allegations of where that money eventually landed given Hunter Biden’s unexplainably high compensation package while sitting on the board of Burisma Holdings:

The bank records “verify the counterfeiting scheme accumulating $156,073,944.24 with an average account value (monthly balance) in the amount of $6,785,823.66.” Burisma, the filing claimed, financed “Atlantic Council (Ukraine) and associated rogue operatives from the [U.S. State Department], FVEY, and CrowdStrike in Ukraine, suing PrivatBank.”

Hunter Biden, having no experience in the energy industry and no particular knowledge, (as far as we can tell) of Ukraine was paid half of the $166,000 monthly compensation sent to him and his partner Devon Archer, for serving as directors of Burisma, according to reports.

By comparison, energy giant Exxon pays their board members one-third that amount.  What did Burisma, widely acknowledged as the epicenter of Ukrainian corruption, get for all that money?

(JohnSolomonReports.com) Hunter Biden and his Ukrainian gas firm colleagues had multiple contacts with the Obama State Department during the 2016 election cycle, including one just a month before Vice President Joe Biden forced Ukraine to fire the prosecutor investigating his son’s company for corruption, newly released memos show.

During that February 2016 contact, a U.S. representative for Burisma Holdings sought a meeting with Undersecretary of State Catherine A. Novelli to discuss ending the corruption allegations against the Ukrainian firm where Hunter Biden worked as a board member, according to memos obtained under a Freedom of Information Act lawsuit. (I filed that suit this summer with the help of the public interest law firm the Southeastern Legal Foundation.)

In November of this year, as a result of FOIA request, Solomon reported he had come into possession of emails between the Burisma energy company and U.S. State Department

The emails suggest to me that Burisma was seeking assistance from the State Department to influence the Ukraine prosecutor to drop the corruption probe against Burisma and doing so by leveraging Hunter Biden’s board membership.

The ties that are emerging cannot be easily dismissed by anyone seeking to learn what really happened with foreign interference in the 2016 U.S. election.

Not surprisingly, the media has not only avoided this story like the plague, they have made the specious claim that any such claims have already been debunked.

Democrats, relying on unflagging support from the mainstream Marxist media have insisted that a totally discredited ‘dossier’ compiled by foreign spy (Christopher Steele) regurgitating information from a Kremlin-linked source, created a legitimate genesis for three years of multiple investigations that President Trump was an agent of Russia.

As an outcome of special counsel Robert Mueller’s investigations Paul Manafort was charged with violating FARA laws for acting as an agent of a foreign government without properly registering with the U.S. government.  A rarely enforced law that would likely take down two-thirds of our elected officials in enforced more broadly.

In the face of significantly more evidence, simple fairness would result in the investigation of the same charges against Hunter and Joe Biden.  Especially in light of the fact that the person bringing the charges has a significantly greater history of exposing corruption and corrupt enterprises.

If this was the extent of the Bidens’ corruption it would be devastating to the current Dem presidential frontrunner.  But, according to perhaps the most acknowledged RICO prosecutor in American history, it’s not. Not by a long shot.

Rudy Giuliani, who famously applied the Racketeering Influenced and Corrupt Organizations act to bring down the major crime families in NYC, has been investigating the Democrats’ control over the Ukrainian government and believes he has evidence of the corruption that it generated.

Doc’s showing she was denying visas to witnesses who could prove Biden & Dem corruption.

It’s been fairly well established, though the proof remains under seal, that within a month or so of being appointed special prosecutor, Robert Mueller became convinced there was no evidence of collusion between Trump and Russia.

It’s almost a certainty that if those sealed documents – Rod Rosenstein’s charging memos – are opened we’ll discover that Mueller spent the last twenty months of his inquest trying to goad Trump into an obstruction of justice charge.

Joe Biden has said (and since flip flopped) that he will ignore any subpoena calling on him to testify in this case.  What is he hiding?

But the Biden/Democrat corruption doesn’t even end here.

By protecting Burisma, as the filing claimed, the funding relationship between the Democratic Party, George Soros, the Atlantic Council (Ukraine) and associated rogue operatives from the [U.S. State Department], FVEY, and CrowdStrike in Ukraine, and PrivatBank was able to be kept hidden.

Unlike the propaganda media pundits, I’ll readily admit it if I’m proven wrong about the criminality that we believe Giuliani is preparing to expose.  But, only after an exhaustive investigation comparable to the ones conducted to obstruct the Trump’s presidency.

The Biden’s can only hide the truth for so long.  Democrats, would have thrown him overboard already unless the Bidens’ corruption was just the tip of the iceberg are Giuliani has claimed.

What are the Democrats, the media, and the World Marxist Movement hiding?

“I am also going to bring out a massive pay-for-play scheme under the Obama administration that will devastate the Democrat Party.”